I’ve not been actively engaged with photography in recent months, especially during the coronavirus lockdown. However, I have spent time looking through photos I made in December 2019.

This one is from a walk I completed on Christmas Day. The photo was made from Catbells, the final summit of the Newlands Horseshoe. A 12 mile walk and 3900 ft of ascent, visiting the summits of Robinson, Hindscarth, Dale Head, High Spy, Maiden Moor and Catbells. It was a truly spectacular day, one of the best walks I’ve done.

END_OF_DOCUMENT_TOKEN_TO_BE_REPLACED 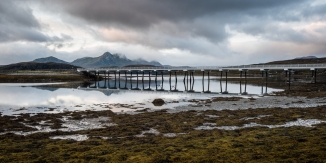 Pictured above, from a recent 2 week trip to Scotland, is the mountain Ben Loyal, also known as the Queen of Scottish Mountains due to its majestic profile. Golden eagles, ospreys and sea otters call this location home. I crossed the bridge in this picture a number of times when heading out to Thurso and Dunnet Head Lighthouse. 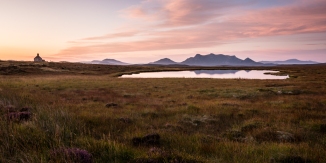 The second photo is of Moine House and Ben Loyal. The Moine is a vast area of heather moor and peat moss which for centuries has made travel difficult in this remote region. The first good road across the Moine was built in 1830 with Moine House providing a welcome rest for travellers. The third photo is also from the Moine, this time picturing Ben Loyal and the Munro, Ben Hope, reflected in a lochan. 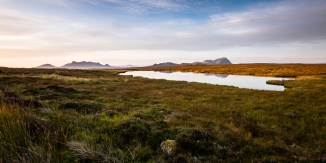 Below is Dunnet Head Lighthouse at dawn with Orkney veiled in mist on the horizon. The Old Man of Hoy, a 449 ft sea stack, can also be seen in the far distance. Dunnet Head is a great place for whale watching. Hoping to spend 4 or 5 days at Cape Wrath Lighthouse next year. It’s well off the beaten track – a 12 mile coastal walk from Blairmore.

A further selection of photographs from my trip to the Faroe Islands back in September 2018. The photo above was made when visiting St Magnus Cathedral, a ruined medieval cathedral in the village of Kirkjubøur on the island of Streymoy. On an exterior wall there is this weatherbeaten relief of the crucifixion of Jesus.

Streymin Bridge, Oyrarbakki which connects the islands of Streymoy and Eysturoy. The Föroya Bjór truck in the middle foreground is making its way back to the Föroya Bjór brewery in Klaksvík which was established in 1888.

Fishing vessel in for repairs at Klaksvík. Visited this boatyard after returning by ferry from the neighbouring island of Kalsoy.

The last two photos are of the Westward Ho (TN54) which was built in 1884 in Grimsby, England. It was used as a fishing vessel from 1895 until 1964. This included service during World War 2 when it fished near Iceland, providing much needed fish for Scotland. It’s now used for commercial boat trips running from Tórshavn, the capital of the Faroe Islands.

I’m not an advocate of carving names or initials into tree trunks but I often document them. I initially read the first as USA but I think it is in fact LISA. These four examples are from the Lake District.

Each is a 6 x 9 inch platinum/palladium print made using the 19th century platinum printing process. Shot with a digital SLR each image was processed in photoshop to produce a negative which was then printed on Pictorico OHP transparency film. The final prints were made on Bergger COT-320 paper. 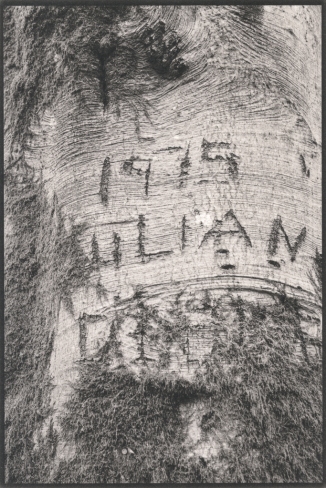 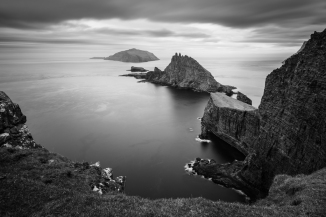 The Faroe Islands are truly spectacular and I had the pleasure of exploring them for fifteen days back in September. Had a great day hiking out to the location above, it’s one of the best walks I’ve ever done. Viewed from Kviviksskoranøva, the islet is Tindhólmur with the island of Mykines beyond.  The five peaks of Tindhólmur are named Ytsti, Arni, Lítli, Breiði and Bogdi. Mykines has a population of ten and is the westernmost island of the Faroe Islands. The artist, Sámal Joensen-Mikines, was born there.

It was a bit of a trek getting to Kallur lighthouse in the second photo. I flew to the Faroe Islands via Copenhagen, then drove to Klaksvik and caught the ferry to the island of Kalsoy. Drove through four mountain tunnels and then hiked for one hour to get to this particular spot. Once the wind had eased off I felt brave enough to cross the ridge (1000 ft drop to the sea on each side) to the point where I made the photo. 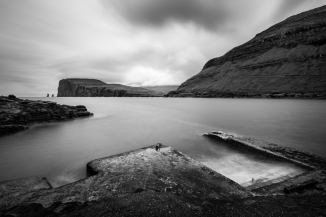 The third photo is of two distant sea stacks viewed from Tjørnuvík. They are named Risin and Kellingin (The Giant and the Witch) which relates to a legend about an Icelandic giant and witch who attempted to haul the Faroe Islands back to Iceland with a rope. Needless to say, they encountered some difficulty in achieving this! The mountain split at the point where the rope was attached but the giant and witch continued with their task throughout the night. As dawn broke, the first beams of sunlight turned them into stone. The notch where the rope was attached can be seen from the other side of the headland. Risin is 71 metres in height and Kellingin is 68 metres.

St Olav’s Church above is a medieval church in the village of Kirkjubøur and is the oldest church in the Faroe Islands. The north wall has evidence of a former opening, through which lepers listened to the service from outside. A Viking runestone was housed in the church but is now held in the national museum, Tórshavn.

The final image is of what is believed to be a Viking sundial or a compass rose. Approximately twelve inches in diameter it is situated close to the Tinganes in Tórshavn old town.

More of these images can be seen on my website using the following link. Please take a look if you have a few minutes 🙂 : Faroe Islands

Eden Valley Artistic Network (EVAN), which I’ve recently joined, is a group of artists and photographers based in the Lake District and Eden Valley.

Pictured, are two of my photographs to be included in the EVAN Remembered Exhibition, 11th November – 17th November, commemorating the Armistice Day Centenary. The photographs were made with a 100-year-old Vest Pocket Kodak camera and depict Crucifix Corner and Mouquet Farm on the Somme battlefield. Some of my Lake District photos have also been included in the Autumn Open Exhibition, 18th October – 9th November.

Both will be held at the EVAN Gallery, 4 Corney Place, Penrith, Cumbria, CA11 7PX. Showcasing a wide range of work from local artists the gallery and studios are open Tuesday to Saturday from 10am – 4pm.

For more information about the group’s artists and future events please click on this link: Eden Valley Artistic Network

I’ve recently been reading Brooks Jensen’s The Best of the LensWork Interviews. I really enjoyed the Alexandra de Steiguer interview, who for the past two decades has spent five months each year working as winter caretaker and photographing the Isles of Shoals.

Winter’s Watch, filmed, produced and directed by Brian Bolster is a short documentary about the Isles of Shoals and Alexandra de Steiguer’s beautiful images.

The Isles of Shoals

Here’s an excellent short video from Haussmann Visuals showcasing the spectacular Faroe Islands which I’ll be visiting later this year. I’ve wanted to visit the islands for a number of years so I’m very much looking forward to photographing the stunning landscape and seascape. A great deal of my research for this trip has been done with the assistance of Google Earth – it’s a remarkable aid in getting to know a location.

Also been busy framing prints in preparation for the Solway Arts Exhibition at Allhallows Community Centre, Fletchertown, Wigton, Cumbria, CA7 1BS. Currently trying out some double profile frames which is a departure from the plain frames I’ve used before. The exhibition runs from the 18th August – 27th August 2018, 11.00 am – 4.00 pm. Free entry and the tea room is open for refreshments 🙂

I’ve recently completed my 176th Wainwright fell with only 38 left to complete. This photo was taken in February 2018 on my way up to High Raise and Sergeant Man from Stonethwaite. The Solway Firth, Bassenthwaite Lake, Skiddaw and Keswick can be seen in the distance.

I had a successful winter walking from both Stonethwaite and Seathwaite which are great jumping-off points for a number of superb fells. Only had one mishap when falling off the side of Glaramara during a steep decent in wet weather. Luckily I did not fall far but had a sore back for a few days.

All going well, I should complete the Wainwrights this year. I’m then hoping to trek in the foothills of the Himalaya. The trek that really appeals to me is a two week hike which includes spectacular views of Everest in the distance along with visits and accommodation at a number of the monasteries. The tranquility and photographic opportunities will be incredible.

I’ve been thinking about taking a medium format film camera with me but I’m now considering taking a digital SLR. I just hope I can find a socket for the battery charger!!

More photos from Hadrian’s Wall in winter. Milecastle 39 and Sycamore Gap are visited by large numbers of people but on this particular day there was only a handful of us out walking. Hadrian’s Wall has an abundance of incredible locations that are well worth visiting. The landscape it occupies never fails to take my breath away.